It's been a busy start for 2019 for the Beyond War project partners. We promised to keep you up to date.

Your contributions mean all the world to us and help hugely building a movement creating a just and peaceful world.

With your help, our partners are out and about. PeaceBus has been activating the summer in the southern states. #WagePeace assisted associates with digital campaigning. Pasifika has continued to train leaders in the volatile and unrelenting context of West Papua. A Peaceable Sovereignty supported First Nations connection to Country near the Shoalwater Bay Military Training Area.

We hope you will read these stories and be inspired. Your contributions go a long way directly supporting activists on the ground.

In peace and solidarity, 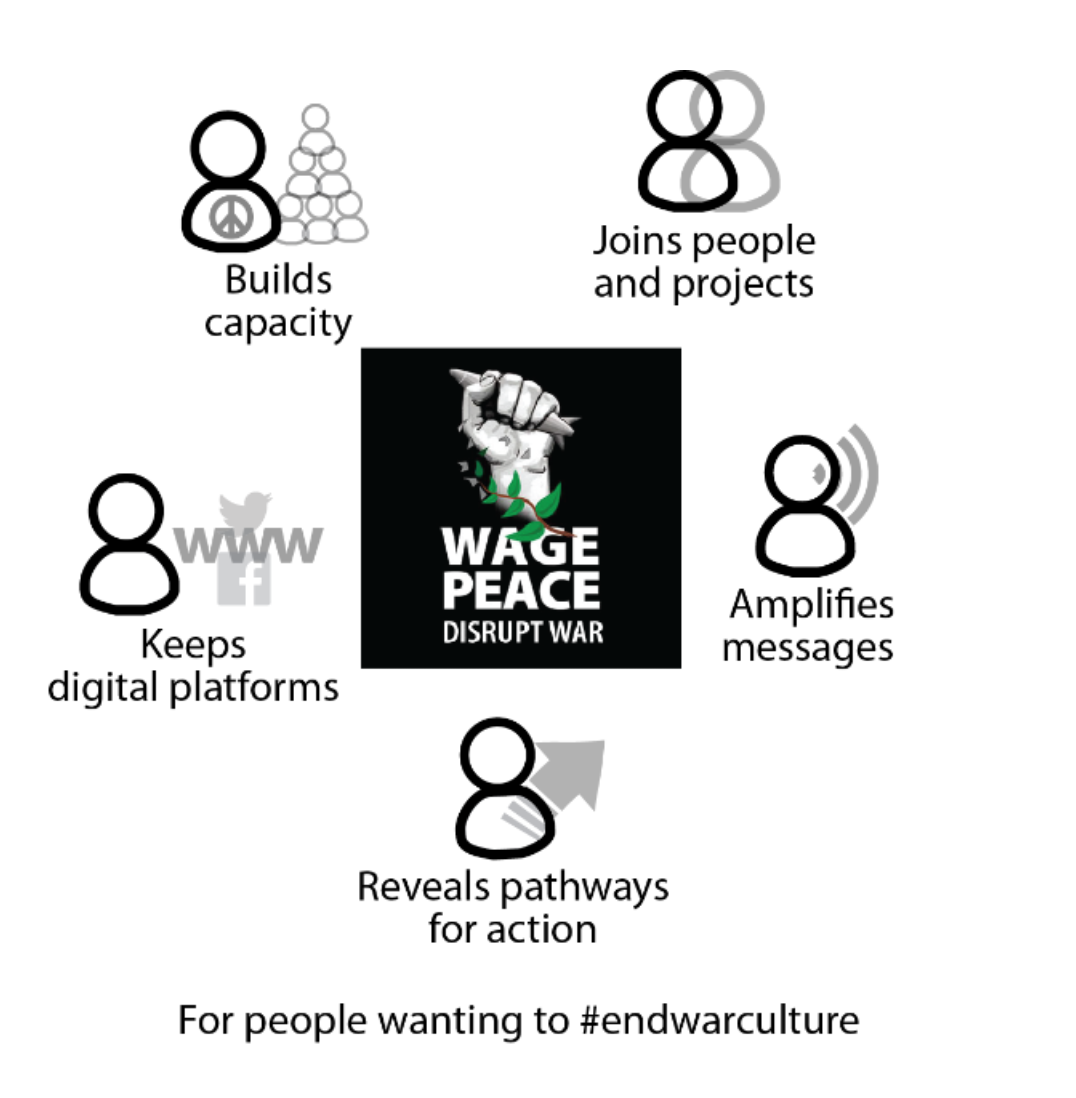 Right now, building skills in digital capacity is important for Wage Peace. We've been in Sydney, Adelaide and Cairns running workshops and pursuing relationships with local groups. In March, we'll be in Canberra.

West Papuan people who live in Cairns and Gimuy Peace Pilgrims took action against the AFP in November to #MakeWestPapuaSafe. Wage Peace provided the digital services pushing the action out to a much larger crowd. The event challenged the AFP's lack of accountability in training Indonesian security services.

A serious report from Amnesty International suggests that the situation may have become worse since the AFP have been involved. Who would know? There is no evaluation to check human rights risk. Because people in our networks have followed that issue for the last 9 years, Wage Peace has linked the AFP training with the #ToxicSAS. We can see the bleedin' obvious: Australia is training and arming Indonesia in the very practices that members of the SAS are under investigation for. Australia is exporting abuse practices learned while working alongside US security services during the Iraq and Afghanistan wars.

More and more it appears that the ADF is a battalion of the US and actual independence is illusory. Our force was handed from UK control to US control sometime in the late 50's and we are not really involved in major decisions.

Wage Peace has assisted with the development of focused petitions and campaigns such as a call by the Independent Peaceful Australia Network (IPAN) to stop the funding of loans for weapons/ military exports. You can sign the petition here! 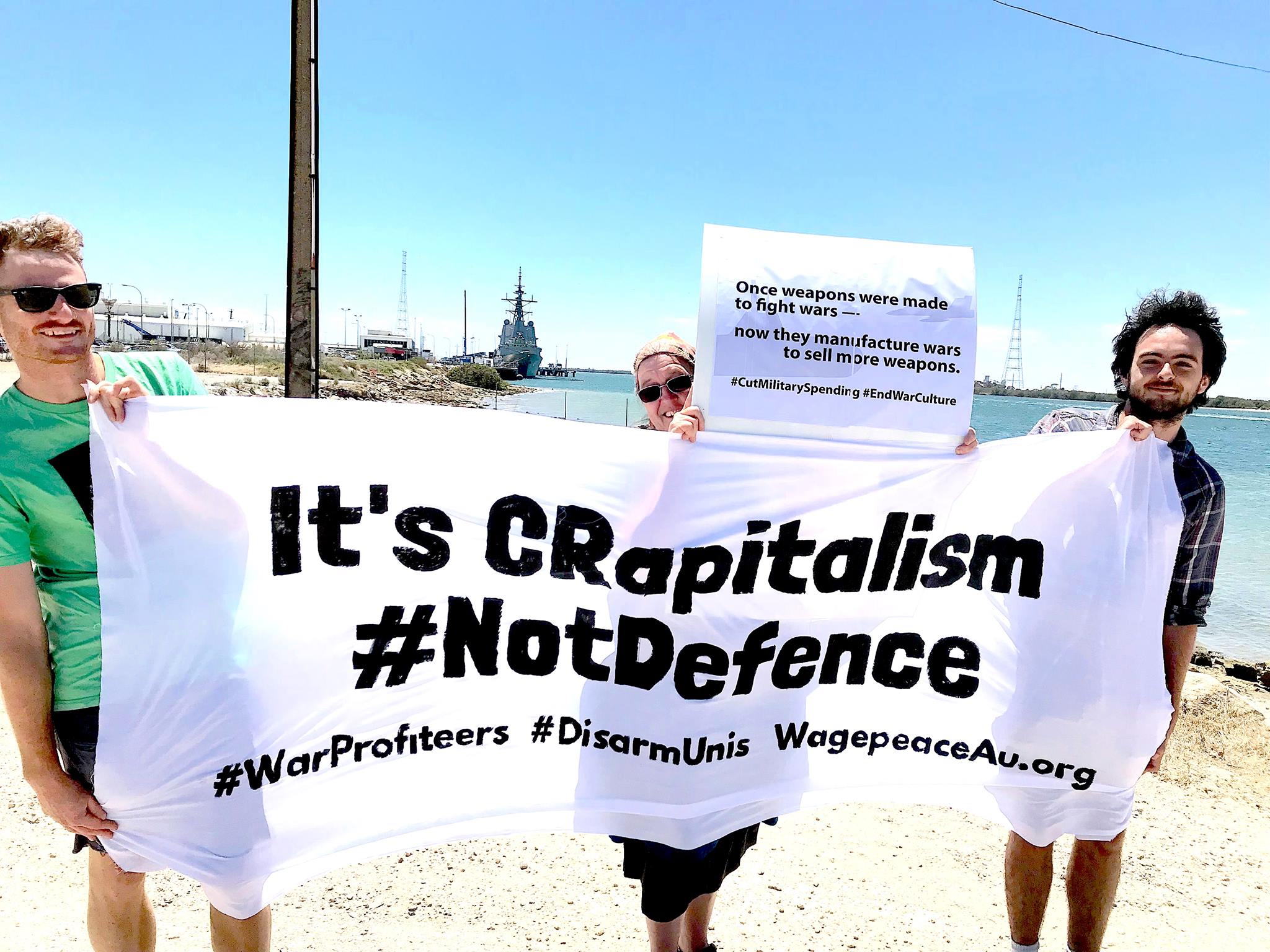 In January, Quaker Peace and Justice Committee Friend Peri Coleman with Wage Peace toured the military 'CRapitalism' sites of north Adelaide. We are speaking to  one of the key untouchables: "Because it may be connected to the "defence of Australia" you must not question." But we say in response, "It's #CRapitalism; #NotDefence!"

From End-War Culture to End War-Culture :) Wage Peace is developing a space on our website for Peace/Anti-Militarism creative culture. There is a growing Spotify playlist and some poetry. Please write to our Facebook page and tell us your favourite antiwar, antifa and anti-militarism anthems and tunes. Female songsters and creatives from the global majority are especially welcome.

Pushing Back of Militarisation of Indigenous Lands

Since 2005, because of the impacts of military training exercises near Rockhampton, Peace Convergence organisers have focused on networking with local communities. We have engaged in environmental assessment processes, and built relationships with affected First Nations people.

We want to see Shoalwater Bay demilitarised and returned to Traditional Owners. The US-Australian military exercise, Talisman Saber is the tip of the iceberg of a deep military relationship Australia is cultivating with the USA. 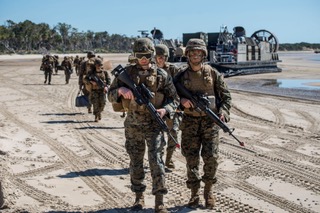 Talisman Saber, is taking place for the eighth time this year. Its purpose is to wave the sword in the region, to demonstrate and increase the might of the US military presence and Australia’s support for it. You can tell by the name!

We recently visited Stanage Bay which is just to the north of the Shoalwater Bay Training Area. The public beach was appropriated by the military during 2017 Talisman Saber and will again be for TS19. The Darambal people have limited access to much of their country due to occupation by the military (SWBTA) and freehold titles by farmers.

We were fortunate to be accompanied by Darambal traditional owners who shared some of their knowledge about this land and their ancestors but also their struggle in preserving and maintaining culture. We also met with settlers, tourists and fisher people at Stanage Bay as we sought to understand the impact of militarism and colonisation in this region. To learn more of this trip you can read about it at peaceconvergence.com.au

We are currently in the process of developing new tools, including a visual product, exploring the natural beauty and intrinsic value of Shoalwater Bay.  We are working closely with our First Nations friends to find new ways of speaking about and connecting to the issues. We hope this will provide greater long-term support for the process of decolonisation, affording Darambal people access to their land. We look forward to standing alongside them to protect it. 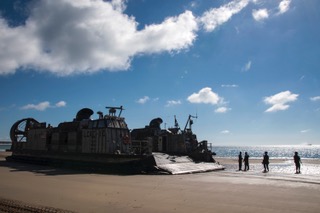 According to Defence, Talisman Saber is “meant to achieve interoperability and strengthen the US-Australia alliance”. Satellite activities take place around Queensland, in the Northern Territory, and the Timor, Coral and Arafura Seas. Across all of these a common thread is the ongoing colonisation, nuclearisation and militarisation of important ecosystems and First Nations' land. In all these regions, militaries control access to local communities’ traditional lands. Yet there has been small but consistent opposition to Talisman Saber in Australia and a growing movement towards decolonisation and demilitarisation around the world.

Support for military industries is increasing in Queensland. The Australian government opposes nuclear disarmament. There are several proposed expansions (land acquisitions) to military presence. This means our work has never been more important.

Due to the combined threat of climate change and nuclear war, The Bulletin of Atomic Scientists has moved the time on the Doomsday Cloak to 2 minutes to midnight. In the Trump era, we have the opportunity to help move away from military-driven disaster. By valuing spaces, standing for them and walking and working alongside their traditional custodians we can dismantle the structures that push for ongoing military use and usurpation of land and seas. 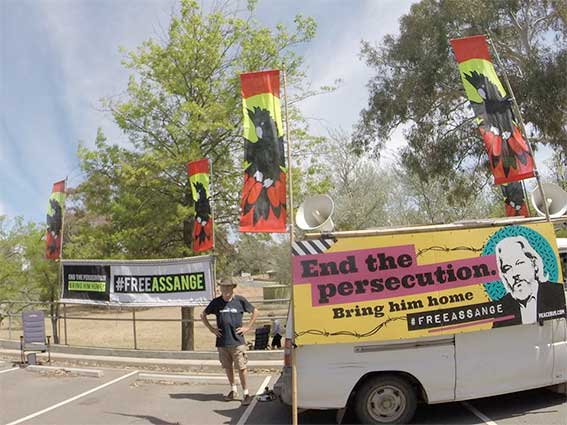 Military Spending and the #ToxicSAS: Peacebus was outside the US Embassy in Canberra on 4 November 2018 with a #FreeAssange display. It was a quiet Sunday but we didn’t go unnoticed, at least not on social media.

We have also been keeping watch on the #ToxicSAS. The IGADF Afghanistan Inquiry into Australian war crimes has been overwhelmed with evidence of abuse from within and without the ranks of the SAS and Commandos.

Leaked documents by Generals have led to an AFP investigation into high profile Victoria Cross winner Ben Roberts-Smith. Roberts-Smith had been lying to camera on Sky News and attempting to silence the Fairfax media with litigation. War Memorial director, Dr Brendan Nelson has weighed in to defend Roberts-Smith saying Australia needs its heroes. He has thus called for a swift winding-up of the Inquiry.

We met with Dr Nelson for a broad discussion on peace issues including Roberts-Smith, the Remembrance Day centenary commemoration and the recently announced $545 million renovations of the Memorial. Peacebus.com reports.

Graeme suggested, yes, we need heroes, but liars are the worst kind of people to believe in. Rather we should be promoting heroes who speak truth to power: Julian Assange for example. 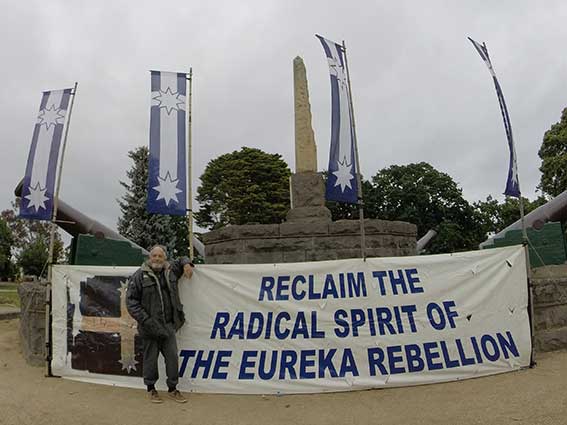 Peacebus has provided brazier, lanterns and flags, for the event for 16 years. It’s a beautiful and deeply meaningful event and beautifying it brings Graeme the abiding love and friendship of Joe Toscano and his mates.

The 4 am Eureka Dawn service takes place on the hallowed ground where the diggers fell in Ballarat in 1854. Activists from different parts and different struggles gather there and affirm the sacrifice and courage of those long dead. We also affirm the principles they espoused which brought them much success as social change makers: Direct Action, Solidarity, Direct Democracy and Internationalism.

Activists from the West Papuan Independence movement attend Eureka in Ballarat and connect the Morning Star as a flag of liberation flag with the Southern Cross. Dr Joe Toscano in return supports them by organising a collective to pay rent for their office in Docklands. 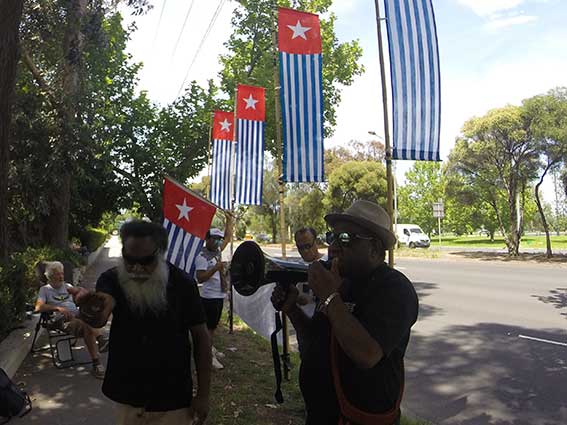 Peacebus Flags: PeaceBus flags were sent to Cairns where they were used for a #MakeWestPapuaSafe event. But they were stolen :( and the Eureka Day March had been the less for them. So we used the availability of time and space near Linton, Victoria over Christmas to sew and paint up a new set of four. Just completed for West Papuan event at the Consulate of Indonesia in Melbourne.

Graeme created more of the popular Redtail Black Cockatoo flags anticipating they would be used at the Invasion Day March 26 January and at the Frontier Wars Story Camp in the lead up to Anzac. The Black Cockies flew on Invasion Day March 26 January in Canberra. So did 30 other flags - Koori, Torres Strait and West Papuan. 1000 participated in the  March and it looked splendid crossing Commonwealth Bridge.

The 26 January is no longer the Union Jack waving, white supremacist celebration it used to be.

References: For more information on the IGADF Inquiry 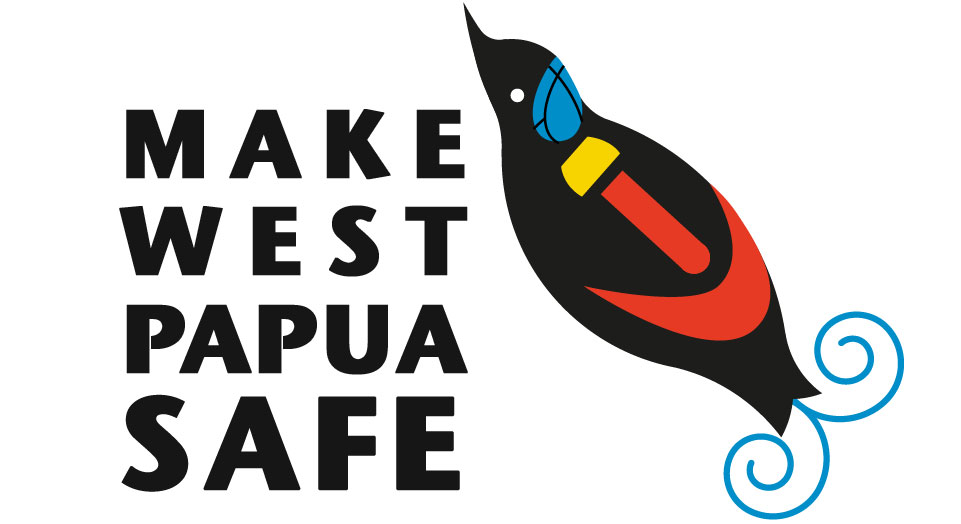 Pasifika continues to carefully lay the ground for the #MakeWestPapuaSafe campaign in Australia. Actions were launched in Cairns in November and will roll out over this year. Our goal is to put pressure on the AFP to stop training the Indonesian special forces.

#MWPS helped persuade the ALP to adopt a motion pursuing evaluation of the effectiveness of programs run by the AFP. The non-partisan #MakeWestPapuaSafe campaign will use this motion to hold the ALP to account and to leverage greater change. We will continue to apply pressure on other political parties to take steps to stop training and arming the Indonesian police and military.

At the same time, we stay in close contact with both the West Papuan community in Australia and with leaders in communities overseas. The situation in Indonesia is volatile and you will have seen – even in the mainstream media – an increase in reports of abuse against ordinary people.

Thanks to funds from Beyond War, we have been able to produce a video about the 2014 Paniai massacre. That 12 min film was released in December and events were held around Australia to remember the young people killed by security forces, and their grieving families left with no redress.

We are still writing up the civil resistance curriculum to be used by other leaders, organisers, educators and communities. The Civil Resistance guide will be published as the third instalment of the popular People Power Manual.

Thank you very much for your support with these projects. We'll be sure to keep you updated with their progress over the coming months as we carry on doing all we can to make the world a better place.

If you like what we’re up to, forward this email to your friends and invite them to sign up...

Those of us working on the project are around the country and we invite you to play with us - or donate!